First Exhibition of Original Turners at his House in Twickenham 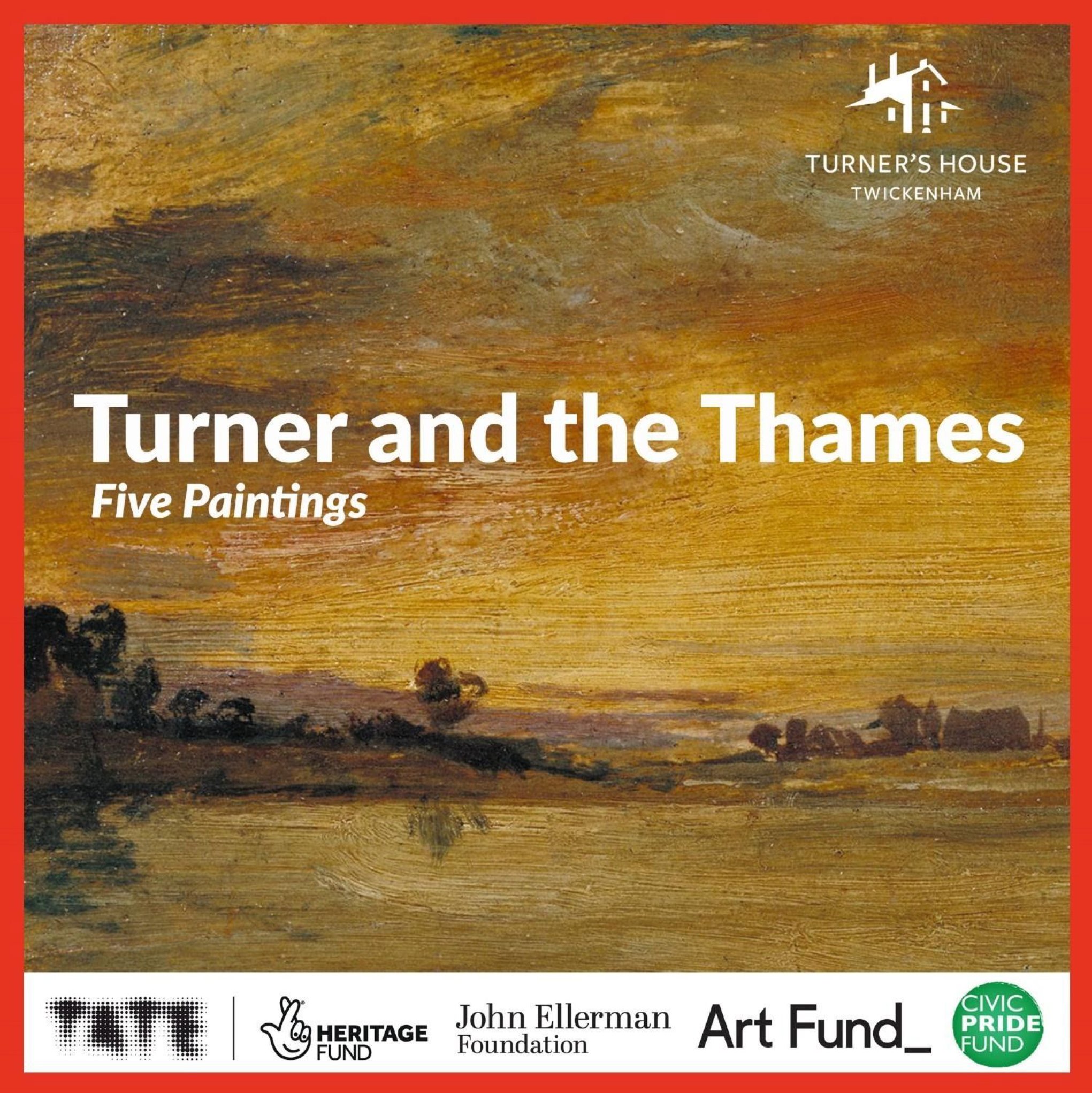 The first exhibition of J.M.W. Turner’s original work in the house he designed for himself is to open on January 10th, 2020, thanks to a generous loan from Tate.

The works have been chosen for their depictions of scenes close to his house near the river, and feature riparian landscapes from Isleworth to Windsor. The Thames enticed Turner to buy a plot of land in Twickenham on which to build a retreat for him and his father in the 1800s and he designed the villa so that he could glimpse the river from his bedroom window. Turner spent a lot of time on the Thames both working and fishing, keeping his catch in two ponds in what was then a large, country garden.

At the time Turner painted the exhibition’s five oils on mahogany panels he was renting Syon Ferry House in Isleworth, retreating from the pressures of London life. Although this house no longer exists, his experience there was instrumental in his subsequent acquisition in 1807 of a piece of land in Twickenham on which he later built Sandycombe Lodge to his own designs, and which is now open to the public. During Turner’s time in Isleworth he acquired a little boat and modified it for use as a floating studio from which he could record first-hand impressions of the river. The exhibition features five stunning examples from this extraordinary series of work created on the river, painted on small panels of wood which were portable yet solid, making them easier to work on in situ. Unusually, they are painted on mahogany veneer and it is thought that Turner, who is known for improvising with materials, may have made them using recycled bits of furniture.

More typically, Turner created many pencil sketches in situ which he collected in notebooks for reference when making larger, finished works in oils and watercolours in the studio. He declared that painting out of doors was a waste of time, as it was easier to mix the paints and work on canvas indoors. This is why the five oil studies in the exhibition are so rare and yet affirm the importance he placed on accurately depicting his favourite river.  These smaller pieces would have helped him to more convincingly evoke the mood of the Thames in larger finished oil paintings back in his studio in Queen Anne Street.

The Thames was an inspiration that flowed through Turner’s life, from his birth near the river in Covent Garden to the houses he lived in at Hammersmith, Brentford and Chelsea. Turner not only valued the river’s aesthetic and emotional qualities but also its cultural potency and he read the work of poets like Alexander Pope who had lived nearby.  While his monumental and sometimes allegorical   depictions of the Thames were refined through the lens of the 17th-century landscape masters he admired, such as Claude Lorrain and Nicolas Poussin, it is in the fresh oil sketches displayed in this intimate exhibition that we see Turner at his most spontaneous and responsive to the natural potential of a landscape which was particularly special for him. The exhibition has been made possible through The Ferryman Project: Sharing Works of Art which is supported by National Lottery players through The National Lottery Heritage Fund, the John Ellerman Foundation and the Art Fund.

The curator of the exhibition, Andrew Loukes, a Trustee of Turner’s House Trust and Collections Manager for Petworth House said, “Turner’s House Trust is delighted that, thanks to the Ferryman Project, we can invite visitors for the very first time to see an exhibition of J.M.W. Turner’s original work in his self-designed house in Twickenham. Visitors will be able to enjoy these rarely seen oils, which offer a fascinating and intimate glimpse of the great artist’s practice, and show him responding with particular immediacy to a subject of great importance to him. We intend this to be the first of a series exploring his relationship to West London and his Sandycombe years.”

The exhibition is made possible through:

The Ferryman Project: Sharing Works of Art is part of the part of The Ferryman Partnership Programme inspired by the recent acquisition of William Stott of Oldham’s Le Passeur (The Ferryman) 1881 for Tate’s National Collection of British Art. It is supported by National Lottery players through The National Lottery Heritage Fund, the John Ellerman Foundation and Art Fund.

Turner’s House Trust is also grateful to two local sponsors. Founded in the arts, Gentle Mathias Solicitors are proud to sponsor the Turner and the Thames exhibition. Gentle Mathias is a niche law practice, with offices in Central London and partners resident in Richmond, providing a range of specialist services tailored to meet the needs of their clients gentlemathias.com/.

Cantell & Co, a bespoke Sales & Lettings agency, based in Richmond, have also supported the exhibition. Their passion for people and property is reflected in their results – Rated No1 Estate Agent branch in Great Britain 2019 Sales & Lettings – Best Estate Agent Guide, Supported by Rightmove cantellandco.com/.