The beginning of a New Year marks a considerable change in the pace of work at Sandycombe.  The roofs are complete, Welsh slate fitted in a traditional manner.  Much of the cleaning and repairing of the brickwork has now been done by skilled bricklayers, including a heritage apprentice.  It is hoped that the scaffold will be dismantled in January, as the work begins to focus on the interior.

A great deal of preparatory work has been done for putting in underfloor heating, which will be music to the ears of the volunteers who valiantly wrapped up against the cold in the past.  Essential services are also being installed, as discreetly as possible.  We know that Turner relied for water on a wellon the corner of his plot of land, but times have moved on.

Conservation on the laylight above the stairs has been expertly 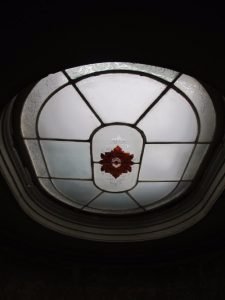 carried out by Holy Well Glass, and is now back in place.  This handsome feature is now unrecognisable from the grubby glass across which squirrels used to scamper.

The design team is now moving forward on presenting the interior of the building.  The pair of handsome mahogany Regency bedposts acquired recently has now been sent to a specialist maker, and glazed cotton will be used to make up hangings.  These will be similar to, though very much more modest, John Soane’s first bed at Lincoln’s Inn Fields.  In Turner’s inventory a ‘quantity of old chintz’ is listed, which sounds rather feminine, but this was the fashion of the time.

A handsome longcase clock has also been purchased for the dining room, which will house clever digital technology to provide a ‘soundscape’ of chatter among the friends we know came to visit Turner for fishing and picnics.

Work has also begun on two ship models in cases, similar to those now in Tate Britain.  One of Turner’s visitors recalled seeing these at Sandycombe, where Turner must have used them for making preparatory studies for marine paintings. Kelvin Thatcher is our skilled model maker, and has provided these preliminary watercolours.  We believe these will greatly enhance the sitting room at Sandycombe.

We have also made some significant advances in looking after the future of Turner’s House.  Three new trustees have been appointed, Dr David Souden, Romy Murray and Dr Jacqueline Riding.  We have also appointed a House Director, Lucy Thompson, who this month takes up the challenge of helping the Trust to get Sandycombe up and running as a remarkable addition to the rich building heritage in Richmond and Twickenham.  We welcome her to this exciting post. 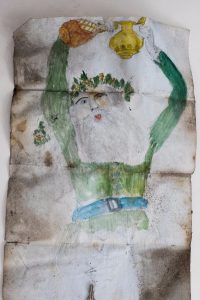 And finally, we wish you all a happy New Year, and celebrate it with this sweet child’s painting, one of the ‘finds’ which emerged from the first floor wallspace.  2017 promises to be a very interesting year for us all!