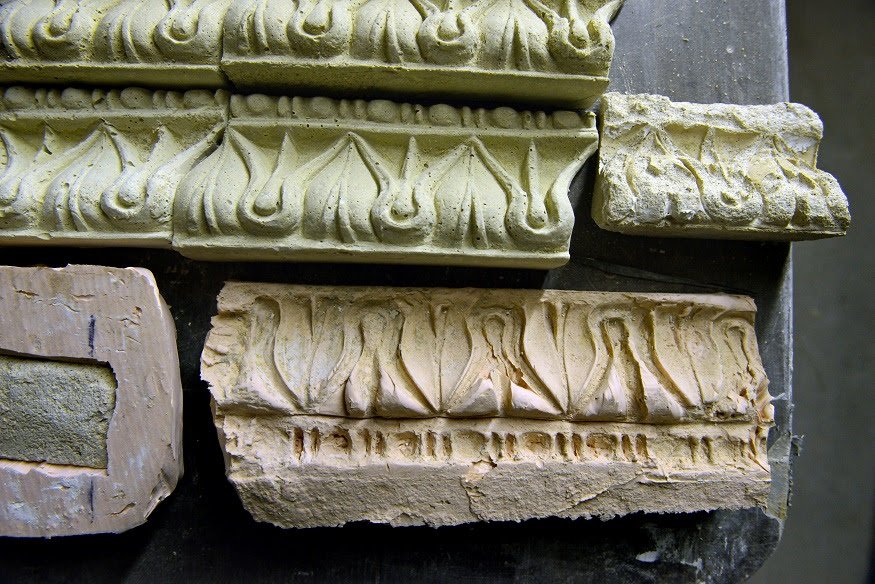 Early in February a ‘Topping Out’ ceremony took place at Sandycombe Lodge, attended by Turner’s House Trust’s new patron, Professor Ken Howard (who, like Turner, is Professor of Perspective at the Royal Academy), our MP Dr Tania Mathias and the Mayor of Richmond, Cllr David Linette.  This was a moment to celebrate the achievements of our skilled contractors, as scaffolding began to be dismantled, and the main focus of work shifted from the painstaking task of restoring the exterior envelope to the interior of the building. 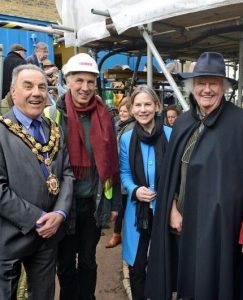 The cleaning and repairing of the brickwork is now complete, though attention is still focused on the porch, which is Roman cement, a form of stucco, which imitates Bath stone, applied to a brick core.  Some barely visible remnants of an unusual egg and dart moulding were in evidence below the cornice, which has been recreated, in the traditional manner, and is now in place, completing the handsome entrance.

The work of landscaping the garden has begun, aiming to bring back something of Turner’s original plot, though this has of course diminished significantly from his original two acres.  Earth is being moved to reinstate the grassy mound on the sloping lawn, which will be planted with wild flowers.  But before the happy task of planting, the ‘hard’ landscaping of paths and disabled access must take place.  If funding can be secured, a decorative pavilion will be installed.

Inside Sandycombe, the marbled decoration of the stair, hall and corridor walls has begun, a finish which paint analyst Helen Hughes found to be consistent with its first treatment.  This lovely pale grey/blue colour, top lit by the newly cleaned glass, floods the stair with light.

A number of skilled craftsmen and women are now working on different elements of the interior.  Kelvin Thatcher’s ship models are well underway, with details like the creation of 74 tiny canons requiring meticulous work. Annabel Westman and Ian Block bring their expertise to the making of an early 19th century bed and its hangings.  Robert Weston’s work to recreate a wallpaper design from the small, torn and dirty fragment found in the wallspace of the upper floor has proved very challenging, but the result of his work is a crisp trellis design with a pin point background, which is being handblock printed to produce the paper for Turner’s bedroom. 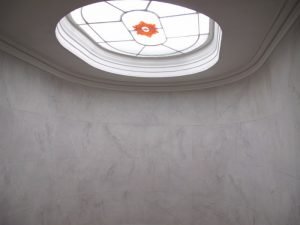 Our house director, Lucy Thompson, was joined by Michelle Graabek, our Activities and Interpretation manager in late March.  Lucy and Michelle now work together on setting up the future management of Sandycombe Lodge, presenting it to the public, and devising a series of events and programmes for our visitors.

We are on schedule to open Turner’s House to the public in July, so please keep an eye on our website for exact timing and also to see more of Jonathan Crane’s fascinating video clips of work in progress. Crowdfunding supporters who opted for a preview tour will hear from us in the next couple of weeks with details. If you have any queries please contact me on info@turnerintwickenham.org.uk.