The last three months have been a time of intense activity both within Sandycombe Lodge and outside. The external fabric of the building is now fully revealed and is looking extremely handsome. 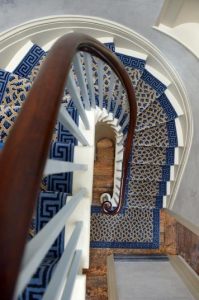 Inside, all painting and papering is now complete. The delicate painted marbling of the vestibule, corridor and staircase is also finished, bringing a sophistication to Sandycombe which we could not have guessed at without Helen Hughes’ detailed analysis of many layers of paint and paper. The original colour of the dining room walls was also determined. Handblocked wallpaper has been hung in the large bedroom, its design meticulously recreated by Robert Weston from the tiny dirty fragment found in the wallspace during conservation. In other rooms paint colours were not retrievable and so appropriate early 19th century shades have been chosen.

With expert help from Annabel Westman and beautiful craftsmanship from Ian Block, curtains have been made for the dining room – an exquisite red moreen for the dining room, glazed cotton for the bedroom of the same fabric used on the hangings of the bed.

Early 19th century furniture has been purchased, following a few hints of old fashioned items in the inventory of Turner’s London house after his death in 1851, which also led us to buy some ‘Turkey’ rugs. The first of the beautiful ship models, made by Kelvin Thatcher, is now in place and the second will soon arrive. 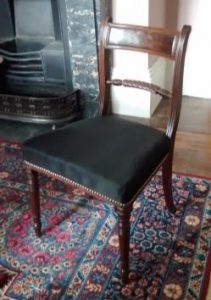 Following conservation, a number of prints after Turner’s paintings have now been hung, including a number from his celebrated Liber Studiorum series – many of these come from Professor Livermore’s well-chosen collection which he left to Turner’s House Trust as part of his bequest, others from a subsequent generous donation.

We have also installed just a few digital tricks – a telescope recreates the view that Turner would have seen from his bedroom window, a handsome longcase clock is the source of the chatter of his visitors, and soon the ‘ghost’ of Turner’s old Dad will inhabit his domain in the kitchen.

Work on the ‘hard’ landscape continues, paths, ramps and parking space for visitors with mobility issues, and the picket fence will soon appear along our street boundary. Laying of the wildflower lawn and planting will take place in due course. 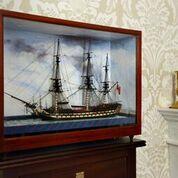 Our house director Lucy Thompson and activities and interpretation manager Michelle Graabek are now installed in their office, the old scullery. Our growing band of volunteers are enthusiastically building their skills in guiding and stewarding.

Turner’s House is now looking magnificent, thanks to the exceptional work of our conservation architect Gary Butler and our contractors team, Fullers, who have worked heroically to bring the project to this point. We are in a ‘soft’ launch period and have been able to invite our many generous funders and those who have given their skills and support to see the results of this year-long project – a remarkably short time to have delivered such a wonderful result.

Sandycombe has been saved for the nation, as Professor Livermore wished, and is now ready to open its doors to the public. This is the last project bulletin therefore, and its place will be taken by a regular newsletter.

Turner’s House Trust thanks you all for your great support and interest during this fascinating time – we
look forward to seeing you and your friends there soon.