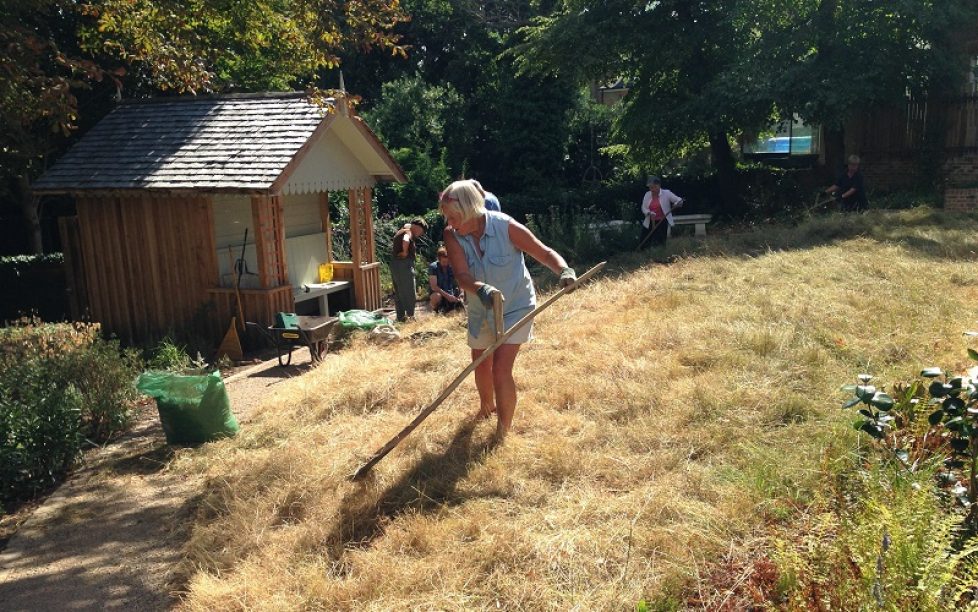 Three years ago this month Poldark set viewers’ pulses racing when he went shirtless for that now famous scything scene which went on to be voted the public’s top TV moment of 2015. The actor who plays him, Aidan Turner, admitted on BBC Breakfast that he wanted to “sex up” that scene, and it’s fair to say he accomplished his mission.

Scything is a form of mowing grass, grain stems or weeds and Aidan showed off his toned torso and impressive six pack as he ripped through the long grass in Cornwall. Similar scenes have recently been spied at Turner’s house, but this time it’s at JMW Turner’s house in Twickenham.

The Turner’s House volunteer garden team gathered last  Wednesday, August 1st,  as they do every Wednesday morning, for a special scything workshop run by Elliot Newton, Nature Conservation Manager at the Environment Trust. He demonstrated how to put the scythe together, sharpen the blade and the art of cutting with a scythe.

Elliot explained that strength is not needed so much as an effective sweeping motion. He showed how to gently rotate your body at the waist drawing the blade along so it moves in an arc from the side, across in front of the body. He then helped all the volunteers get stuck in using Austrian scythes, cutting the long grass of the wildflower lawn at the back of Turner’s House.

“It was hard work but gave our arms a good workout.” explained Julia Scaping, the head volunteer gardener; “It takes a bit of getting used to to master the knack of the sweeping movement, but we thoroughly enjoyed the morning and have picked up a useful new skill.”

All the team kept their tops on, despite the heatwave, which has made watering duties a particular focus at the newly restored garden at Sandycombe Lodge, the house JMW Turner designed himself. Nearly 150 different species of plants have been put in with a view to keeping the garden of interest to visitors throughout the year.

JMW Turner exhibited an oil painting in 1826 depicting some scything one early summer’s morning at The Seat of William Moffatt Esq., at Mortlake which now belongs to The Frick Collection in America.