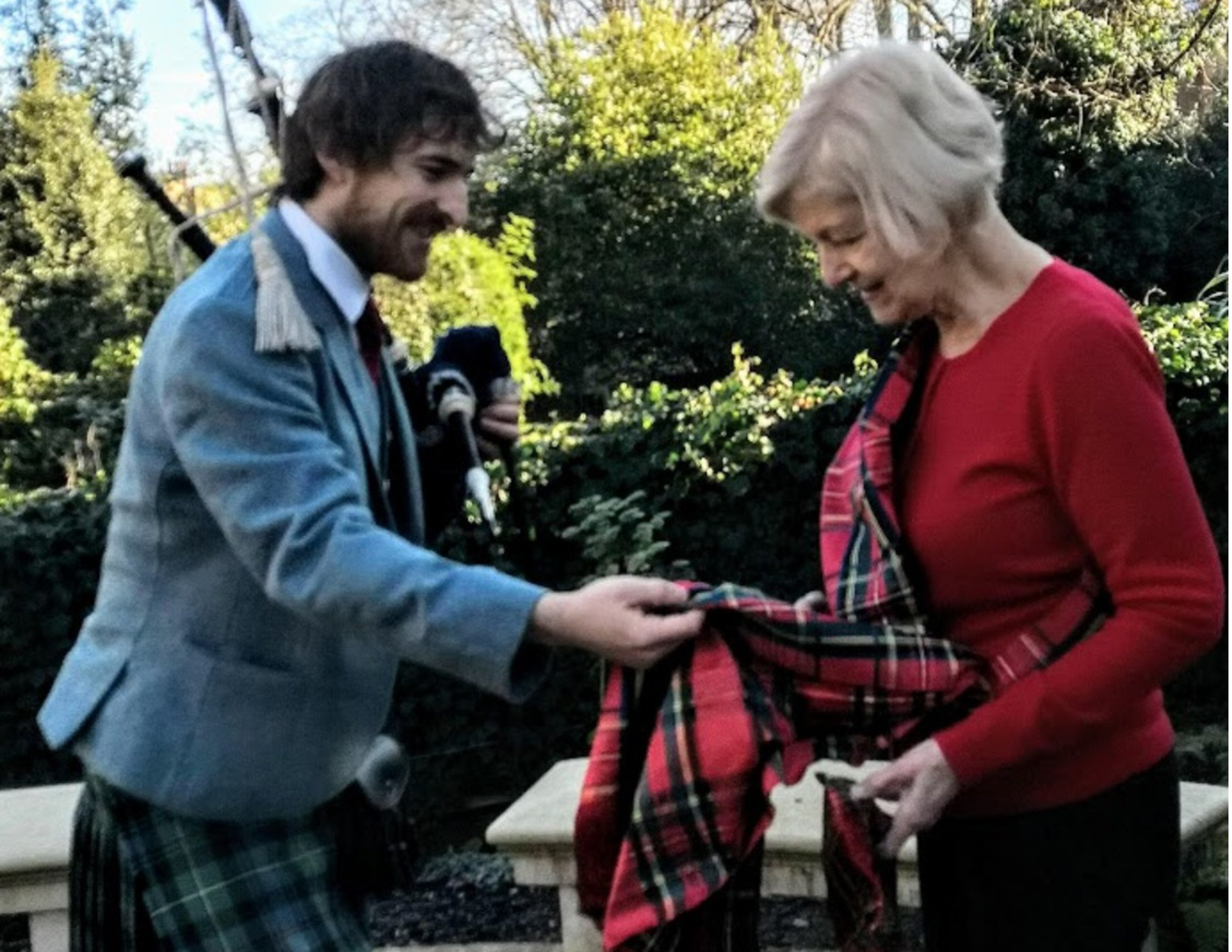 A volunteer at Turner’s House in Twickenham has discovered a very special family connection to their current exhibition of Turner’s illustrations for Sir Walter Scott’s poetry and prose.

Ann Keay, who regularly conducts tours of Turner’s House, owns a plaid sash and bonnet worn at the reception given by the Lord Provost of Edinburgh for King George IV’s visit to Scotland in August 1822, which was attended by both Scott and Turner. They were worn by Mary Ann Collins, the niece of the Lord Advocate of Scotland and Ann’s great, great, great aunt.

J.M.W. Turner attended this banquet where he discreetly sketched on small cards and later produced an unfinished oil painting of the royal scene, now owned by the Tate  – in which he shows a room full of mostly men, but one identifiable woman, quite possibly Ann’s relation.

Sir Walter Scott arranged King George IV’s visit, the first visit of a reigning English monarch to Scotland in nearly two centuries and the first ever visit of a ruler of the Hanoverian dynasty. Ann Keay’s tartan is Royal Stewart the plaid worn by the King himself. The trip was devised to divert the King from meddling in foreign affairs at a meeting in Europe and to divert the Scots from radical reform. Scott persuaded George, a clinically obese and unpopular monarch, that he would look stately and slimmed down in a kilt and pink pantaloons to conceal his bloated legs, described as “buff coloured trowsers like flesh to imitate his Royal knees”. When someone complained that the kilt had been too short for modesty, Lady Hamilton-Dalrymple replied “Since he is to be among us for so short a time, the more we see of him the better.” Caricaturists were not convinced.

Sir Walter Scott stage-managed the pageantry for this successful royal visit, with the help of a theatrical manager. Described by John Murray, the 4th Duke of Atholl as  “one and twenty daft days’, the visit included an event where 457 ladies lined up to be kissed by the king and a host of “traditions” specially invented for the occasion. Scott wrote a booklet of hints on etiquette and stipulated that at the “Highland Ball”  “no Gentleman is to be allowed to appear in anything but the ancient Highland costume”. So lowland gentlemen were compelled to desperately seek out Highland ancestry (however remote) and a suitable tartan kilt from the Edinburgh tailors, who responded inventively. This marked a turning point for tartan and what had been considered the primitive dress of mountain thieves was transformed into the national dress for the whole of Scotland. The catering contract for one of the events was won by Ebenezer Scroggie, who would become the posthumous inspiration for Charles Dickens’ character Ebenezer Scrooge in A Christmas Carol, so it seems likely the food was as scant as the kilts.

Turner’s House’s current exhibition Miniature Lands of Myth and Memory combines Turner’s exquisite designs with some of Scott’s powerfully evocative text, taking the visitor on a time-travelling journey through the north of England, the contested Border country between England and Scotland and the wild Western Highlands. Visitors can follow a trail of landscapes, antiquities, folk tales and ballads that inspired Scott’s poetry, before turning to recent history, the warmer climes of France and Italy and the battlefields of Napoleonic Europe.