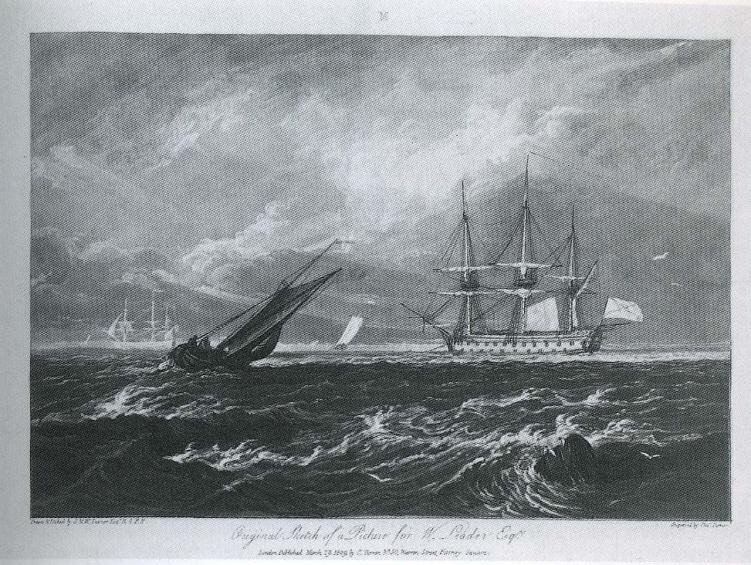 Etching and mezzotint on paper

‘Original Sketch of a Picture for W. Leader Esqr.’, Etched by J.M.W. Turner, engraved by Charles Turner, after J.M.W. Turner

Ships at sea in a lively breeze. Near and on the left, a small vessel strains under sail. In the distance on the right, a three-mast warship lies at anchor. Another warship and a sailing boat in the further distance.

The contrast of a smaller vessel being driven by the wind against the apparent calm of the larger man-of-war at anchor was a motif common in Dutch marine painting, and one which Turner developed in a number of his sea-pieces. The contrast is heightened here by the bands of shadow on the sea and the light and shade in the sky, which emphasise the sense of movement. The overall composition had patriotic implications: of an imperilled but independent nation under the watchful protection of the British Navy. In the initial etching Turner only included two ships; the vessels in the distance were added at the engraving stage.

Turner may have been directly imitating, or emulating, a work by the renowned Dutch marine painter, Willem van de Velde the Younger (1633-1707). The composition is very similar to that of ‘Small Dutch Vessels in a Breeze’, thought to be a studio copy of a Willem van de Velde. In 1800, Turner had been commissioned by the Duke of Bridgewater to paint a companion piece to Van de Velde’s A Rising Gale. The resulting work – Dutch Boats in a Gale, but subsequently known as the Bridgewater Sea-Piece – was greatly acclaimed when shown at the 1801 Royal Academy exhibition (Turner was elevated to Royal Academician shortly afterwards).

William Leader, a London merchant, owned several works by Turner, but no surviving painting corresponding to this print has been identified.