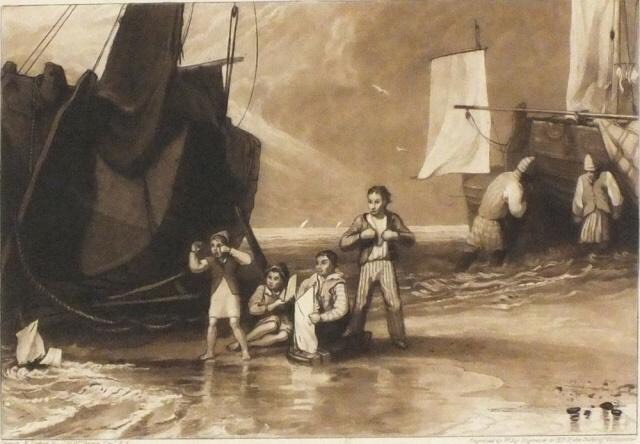 Etching and mezzotint on wove paper

Four boys play with toy boats on the sea shore. Behind them, to the left, the hull of a large vessel, beached in the shallow water. On the right, two sailors push, with great effort, against another vessel, presumably with the intention of launching it from the sand. One of the boys, left, cries at the loss of his toy boat; another, right, stands resolutely, about to remove his jacket.

Turner sets up an ironic juxtaposition between the childish concern of the boys for their stricken toy and the laborious, and presumably perilous, lives of the adult sailors in the background. The taller, standing boy, who is dressed in traditional garb of a sailor – striped trousers and short jacket – strikes a gallant pose, readying himself to go to the rescue of his play-mates’ boat. To emphasise this boy’s heroic place in the drama, Turner casts a ray of sunlight on his face. The anodyne scene therefore takes on patriotic dimensions, the taller boy representing the British Navy, poised to come to the aid of a nation in distress.

Turner used the metaphor of the loss of the children’s toy boat on a number of occasions in his art, notably in Dido building Carthage, or the Rise of the Carthaginian Empire (1815, National Gallery) where the toy boat sailing out of reach prefigures the downfall of empire. Two other Liber compositions feature boys playing: Juvenile Tricks (Part V) and Young Anglers (Part VII).