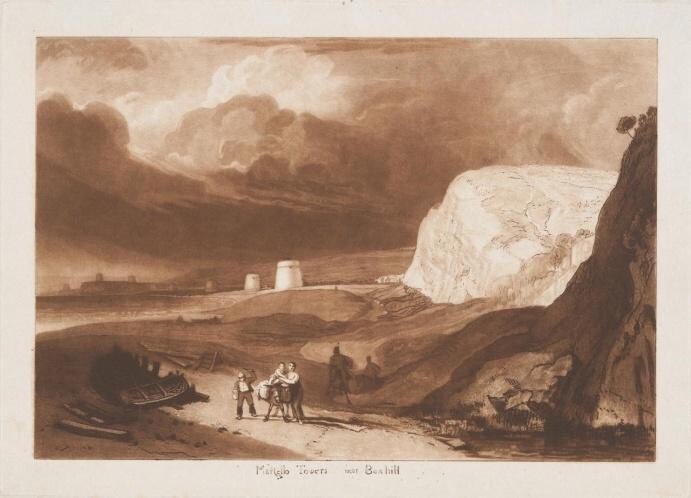 Etching and mezzotint on paper

Coastal scene. Sea in the distance to the left; a line of six circular Martello towers along the shore. A wide beach, dotted with beached vessels and the wreckage of boats. Cliffs and headlands to the right. A group approach along the beach, consisting of a woman and child on a mule and a man walking, the latter beating the mule to encourage it to proceed. Behind them, two mounted hussars follow.

The print depicts part of the Sussex coast at Galley Hill, just east of Bexhill, looking towards Pevensey Bay in the distance. The South and East Coasts of England were fortified between 1805 and 1812 with round Martello towers, which acted as look-out posts and gun emplacements, built against the imminent threat of invasion by Napoleon’s forces.

The dark, storm-laden sky alludes to the menace of war, as do the rotting remains of a ship in the foreground. The figures on the beach might be fleeing from the approaching storm, though the mounted hussars appear to be making faster progress than the family-group with its recalcitrant mule. This is one of a number of Liber prints that directly or indirectly refers to the Napoleonic Wars and the British response.

Turner had visited the South Coast during a sketching tour in 1807. His preliminary pencil and monochrome watercolour drawing for the Liber print is in the Turner Bequest at Tate Britain.