Turner’s House Trust was faced with immediate challenges: the roots of yew trees planted close to the house brought rot into the house, and damp from failing gutters and downpipes caused a succession of ceiling drops. Our plans for conservation of the house and for presenting to the public as a small historic house of great significance were carefully drawn together, and our application to 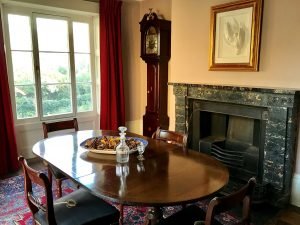 The Dining Parlour at Turner’s House

the Heritage Lottery Fund for development funding was successful. This allowed us to appoint Gary Butler (Butler Hegarty Architects) as our conservation architect, and to begin the extremely hard work of securing £2.4m for plans to go ahead. A further grant of £1.4m from the HLF, and funds raised from generous foundations and individuals (see our donors’ page for details). Our goal was reached in April 2016, and work began at that time.

An important decision had to be made early on. Would we retain the house as it stood, or would we remove the additions of upper rooms and extensions that had been added to Turner’s own design? We chose to return to Turner’s intentions, drawing on the evidence of his own later sketches (Tate Britain Turner Bequest D08966 TB CXXVll 2), the drawing of c. 1814 by William Havell, and the evidence already visible in the building itself. 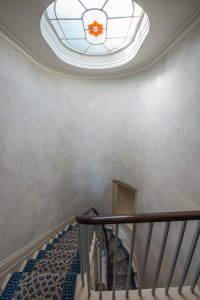 View from the top of  the staircase

During the early stages of conservation work some amazing discoveries were made, making us rethink what we thought we knew about the appearance of Turner’s House. As we had all known it, Sandycombe was rendered stucco, and this seemed to be borne out by Havell’s drawing. But when upper rooms were removed there was no trace of render or paint. When more render was removed, it became apparent that when first built for Turner, Sandycombe was an unrendered and handsome brick building, with careful ‘penny line’

Some fascinating objects were found within the wallspace of the first floor corridor, which had probably fallen through from the roofspace, including fragments of children’s drawings and toys from a later period than Turner’s occupation. But most interestingly this little treasure trove included a scrap of early wallpaper, incomplete and very dirty, but just sufficient to allow recreation of the design which is now hung in the large bedroom. Paint analysis has been a valuable source of information and has allowed us to find some original wall colours and to recreate the early delicate marbling of the hall and stairs.

Sandycombe has been lightly furnished with objects from the early 19th century, using as a source contemporary accounts and information on the old-fashioned items listed in the inventory of his London house, taken after his death in 1851. 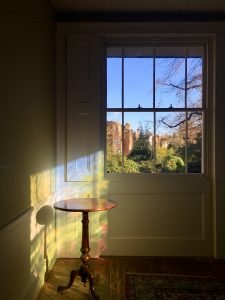 The lovely window in the Small Parlour recreates the view from Turner’s occupation.

Conservation of Sandycombe Lodge was completed in the Summer of 2017, with its brickwork beautifully restored, and all the results of careful conservation study and craftsmanship visible in the joinery, plasterwork and paint finishes. We hope that our visitors will enjoy the experience of discovering this lovely little building, and learning more about the life and work of JMW Turner, one of England’s greatest painters.

More information on the history of Sandycombe Lodge can be found in JMW Turner, RA: the artist and his house at Twickenham, available for £5 at Sandycombe.

The history of Turner’s house from Jonathan Crane on Vimeo.