Turner’s House Trust is very keen to keep in touch with all our many supporters. This is our first report on the progress of the Trust’s project to restore Sandycombe Lodge in Twickenham. Sandycombe was designed c. 1813 by JMW Turner, as a retreat from the London art world, a home for his father, and – most importantly – a place from which he could step out to explore the nearby riverside, the inspiration for some of his most beautiful paintings, all themes which we hope to explore. 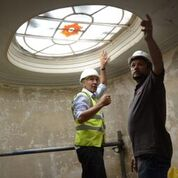 The rooflight on the stairwell has been taken away and will be carefully cleaned and conserved. This photograph shows Gary Butler and site manager Dave White taking a very close look!

The budget for this brave undertaking was £2.4m, which, thanks to substantial support from the Heritage Lottery Fund, many other funding organisations, and a generous public, we have just achieved.  However, this did not cover everything we need to do so we still need to raise at least a further £100,000.

We now enter a new phase, as work began on Sandycombe in early April, with Gary Butler (Butler Hegarty Architects) as the Trust’s conservation architect.  Scaffolding is now complete, the building has been given a monoflex wrap to keep in noise and dust, and considerable exploration of the fabric of the building is underway.  As render has been removed and plaster has been stripped from the original external wall, evidence of a refined bricklaying technique, with ‘penny line -struck’ mortar, has been revealed.

The design team, which now includes heritage consultants Annabel Westman and Dr Jacqueline Riding, is working to establish the appearance of the interior.  Paint analyst Helen Hughes’ work has given us some information, and the finding of a small scrap of grimy wallpaper has given us something tangible to work from.  This was found in the wall space between the first floor corridor and the front bedroom, along with a number of other items from a later date, including an 1851 bill for garden plants.  The wallpaper fragment is now being cleaned, and historic wallpaper experts Hamilton Weston believe that it dates from the early 19th century, and indeed the ‘pin point’ background is quite close to a scrap found at Jane Austen’s house which is of a similar date to Sandycombe.  It will be possible to re-create the design.  The well-worn boot and children’s toys and drawings probably date to the long mid-19th century occupation of the Beaumont family, and will be researched. 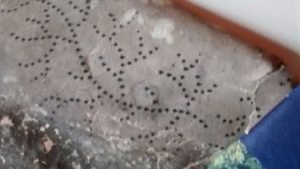 A scrap of wallpaper uncovered on the first floor, with a ‘pin point’ background

We want visitors to enjoy the building itself, as a work by Turner, and so will not be seeking to fill it to the brim.  Accounts of Sandycombe in Turner’s time are fairly sparse, but we are supplementing this by looking at the inventory of Turner’s London house, taken after his death in 1851, and seeking out items which were old-fashioned by that date. To get a sense of scale, Butler Hegarty have made a series of ‘dolls’ house’ rooms – the dining room is shown below, at an early stage – and these will help us work towards final choices and to determine wall colours and textiles.  The great thing is that they can be easily adapted as ideas evolve. 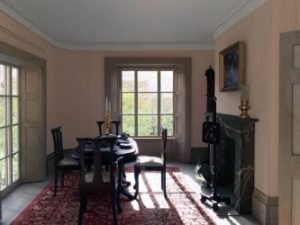 A ‘dolls’ house’ model of the dining room

We are also working with a digital interpretation team to develop sensitive ways in which modern technology can enhance the experience of 21st-century visitors.  We plan to have a telescope in the large bedroom at the back of the house which will allow visitors to see the landscape as it was in the early 1800s, not the later encroachment which now encircles the house on Turner’s originally large plot.  Turner owned several telescopes, and some of his paintings show figures using them to view the river landscape, including a watercolour of Richmond Hill where the focus might well be on Sandycombe!

We will be setting up some ‘open site’ days for partners and supporters with Fullers, our contractors, which will provide a great opportunity to come and talk to the builders.  Details of this will come soon.  In the autumn we will hold an update meeting, and look forward to sharing further developments with you.

We are enormously grateful to all our supporters and partners and look forward to updating you again in the early autumn, and throughout the 12 months or so before we are ready to open the door of Turner’s House to the public – and to you.

Please contact me on info@turnerintwickenham.org.uk if you have any queries.