This second bulletin will tell you about some of the unexpected findings at Turner’s House and the way that the restoration project is now progressing. 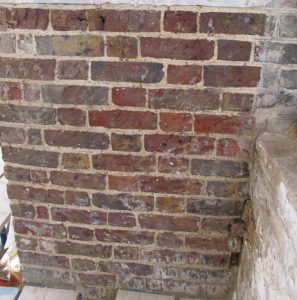 In July we reported that the extensive work to strip out the building had begun. Removing the ceiling of the rooms above Turner’s original single storey wings revealed that the hidden flank walls had never been rendered or painted, and that the brickwork had penny-line pointing, a typical finish, carried out by the original bricklayers.  As further work to remove the rendering progressed, it became clear that all the original brickwork had been given this treatment. The paint and render were first applied when the upper rooms were added to the wings, probably to unify the building’s appearance.  Jonathan Crane’s short video clips of the brickwork discoveries, can be found on the left.

These findings came as a considerable surprise to Gary Butler, the Trust’s conservation architect, the conservation team and to the Trust, since the expectation had been that Sandycombe, in common with many small Regency buildings of this type, had been rendered. W.B. Cooke’s engraving for Thames Scenery, and William Havell’s drawing of Sandycombe on which it was based, had of course added to the expectation that evidence would be found of original rendering, but on looking at other engravings from that series of buildings that we know to be of brick (Garrick’s villa and temple, Chelsea Hospital, for example) and at other contemporary engravings, it is apparent that brick courses are often not shown. Gary Butler discussed these unexpected findings with English Heritage and with LBRuT’s conservation officer, who both agreed that the Trust should proceed to present Sandycombe as a brick building. Brickwork repairs will be made with handmade bricks, using a traditional manufacturing technique of air drying the bricks before firing– a process fortunately aided by a hot late summer.

We must be grateful for other clement weather, in particular the lack of snow over the last few winters.  The roof structure was extra-ordinarily light – timbers were found to be alarmingly small, using much ‘waney edged’ timber. The roof slates were in such a perilously fragile state that heavy snowfalls could have caused considerable damage. The lovely laylight above the staircase is now being painstakingly cleaned and repaired by Holy Well Glass conservators in Wells.

Paint analyst Helen Hughes has made another unexpected finding on the walls of the hall and staircase.  Her analysis has revealed an early delicate blue-grey marbled finish, giving us evidence that this part of the house at least was elegantly finished.

The early 19th century wallpaper scrap which was found in the wall cavity of the front bedroom has been cleaned and conserved, and Robert Weston of Hamilton Weston historic wallpapers is now making a block of this pattern from which wallpaper will be printed for Turner’s bedroom.  The background colour of this ‘pin point’ design is mauve/fawn, a popular Regency colour. 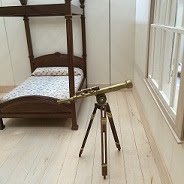 Other findings in the wall cavity were of a later date, as reported in July.  They have now been photographed, and included fragments of toys like this tiny horse, and a child’s drawing of a steam train.  The Great Western Railway ran its Windsor line very close to Sandycombe – Turner sold his small meadow to the railway company in 1846 for a handsome profit, having retained ownership of that small piece of land nearby for 20 years after he sold Sandycombe. The Beaumont children must have had great fun in running up the lane to see the steam emerging from the short tunnel.

We have begun the process of acquiring furniture for Sandycombe in a modest way, with the purchase of a handsome pair of Regency bedposts. This ‘dolls’ house’ image of Turner’s bedroom shows our plans to have a telescope with some digital wizardry which will allow the viewer to see Turner’s original view to Richmond Hill.  Painstaking research on the early 19th century view has been undertaken by Nick Cooksey, and our digital team Squint Opera will translate this into what we hope will be an enthralling feature.

We have run several on-site days for conservation professionals and William Fuller, of Fuller’s Builders, our contractors, has run several very entertaining and informative sessions for the Friends of Turner’s House.

We are enormously grateful to all our supporters and partners and will continue to keep you informed about the progress of our project, until Sandycombe is ready to open its doors next summer.
Please contact me on info@turnerintwickenham.org.uk if you have any queries.